The cold, damp air and the oppressive, grey clouds indicated that winter had arrived. Though the fall had been mild, today people huddled indoors as December settled upon New England. Sunset was arriving much earlier now that the Winter Solstice had passed. Evening was dark.

By this time on a Sunday the streets were quiet. Christmas and the holiday season preparations were in full focus. Illuminated porch lights were subdued by Christmas lights that adorned the homes and trees of the city. One could move about quietly and discreetly, barely noticed.

Though the Sunday traffic had waned, unusual activity was in progress. Around the corner from the park a car moved slowly along a wood lined street. It navigated under the shadows of trees, hidden from the street lamps, finally turning left onto a quiet neighborhood avenue. In front of a house buffered by a cluster of evergreens at the road’s edge, the car stopped. Though the house was gracefully adorned with Christmas lights, the yard remained in the shadows.

The car’s engine and lights turned off. It had stood quietly for a minute when the passenger door opened. Barely visible, a figure cloaked with a hooded garment made his way to the side yard. Without pause, a box, and a bag within, was deposited at the base of the front porch. It was positioned out of sight, protected from view and wind by the steps. The car, hooded figure and driver left before anyone had noticed their presence.

The box and its bag remained where they had been placed, quiet and still. As the chill in the air was magnified by a steady wind, the bag began to move. A faint sound could be heard as well. It was cold and dark, however, and everyone was indoors. The meow persisted, barely audible, as the movement inside the bag waned. An hour passed. Any passerby would have been curious about a box that cried. Sadly, it remained where it had been placed.

Just as the whimpers were fading the front door opened. A young adult stepped outside. Inside, the clamor of dinner preparations could be heard. A television set playing in the background was competing with a radio playing Christmas Carols. Voices in unison stated that the wreath was still in the car. As she made her way back up the front walkway with the wreath in hand a sound, perhaps a meow, caught her attention. She paused, looked around, but did not see the box. Up the stairway she went as a subdued plea for help continued, inaudible.

Then for a moment the wind faded. She had reached the top step and had opened the door when, again the sound, clear as a series of meows, could be heard. Looking back and peering down toward the hedges she tried to focus, convinced she had heard the faint cry of a kitten. Calling to it, she placed the wreath on the landing and slowly descended the stairs. With each kitten call, a muffled meow replied. Upon reaching the bottom step – her eyes trying to cut through the evening shadows, the sound finally identified itself. Hidden between the steps and the hedge was the box. Concerned, she lifted it from the ground. As she did so, the bag within began to twist and turn.

She carried the box up the steps, gently placing it on the landing, and began to untie the laces that secured the bag. Before she could peek inside, out leapt a gray kitten, claws extended. In search of sanctuary, he raced into the warm house through the open door. Almost as quickly, Jocelyn followed him inside. Providence had finally intervened and brought the cold and frightened kitten to safety. The wreath was still on the stoop.

Once Inside, the kitten, happy to be warm quickly surveyed the foyer and rooms beyond. Emboldened by his escape he ran straight ahead. He passed through the dining room on his way to the kitchen where the welcoming sounds of music and activity could be heard. There he saw the comforting sight of Rita, who, startled as first, smiled back with loving concern. Gleefully, the kitten announced his arrival as he stood in the entrance. The enticing aromas that permeated the kitchen air elicited a series of hungry meows. Jocelyn and Rita stood still as the kitten purred and walked bravely back and forth between their legs. It was his way of announcing that this was his new home.

The introduction was followed by a bowl of warm gravy and selectively portioned pieces of fish. Proper kitten food would need to be purchased. Until then, the comforting meal would provide the necessary sustenance. Satisfied, and in appreciation of his welcome, the proud kitten groomed himself with care. Exhausted by his ordeal, he slumbered into the dining room and fell asleep on the rug.

It was the Christmas Season and everyone had been in anticipation of good tidings ahead. Unexpectedly a kitten had been placed at the base of their porch steps, carefully wrapped and positioned to be found. For Bags, the kitten, it was hope and salvation. For Jocelyn, his newly appointed guardian, it was an endearing gift. Christmas had arrived early for both.

Bags would enjoy many adventures with his new family. As his two and four-legged family grew he would find comfort in their fellowship. Though Bags would remain small as an adult, his diminutive size would never preclude his zeal for life and companionship. 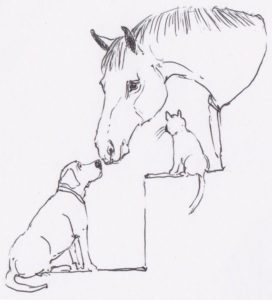